Skip to content
Get a Quote
Lavoriamo
info@blueticket.it
WhatsApp 3923279409 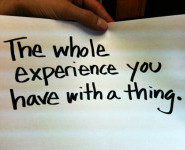 The origins and meaning of “User Experience / UX Design” may seem a bit murky at first glance, to many not already familiar with it. One early use of it, without “user” prefixed, appeared in the nascent “Advance for Design” meetings organized by Clement Mok et al, under AIGA sponsorship, between 1998 and 2000. Mention is made, too, in the first post to uxmatters.com, of Don Norman using the term at Apple as early as 1993. Though implying a Gestalt approach to interactive media design, that is, using a collection of elements to form a pattern which is greater than the sum of its parts, UX Design also puts special emphasis on the human side of human-computer interaction, and its affective results, rather than on the mere usability—the human performance aspect—of computer interface design, which traditionally relates to the field of ergonomics. Usability is of course one of the primary concerns of the user-centric web designer, so it is easy to see how these related areas overlap, and lead to confusion, especially when no dictionary entry exists for UX Design (that I’ve seen), and people often use novel terms in various ways before understanding them well. Another dimension of UX Design, as it related to the field of web design, is the historical one. As professional web design has evolved, and roles and responsibilities have advanced and divided, the professional web design community has had to find ways to differentiate itself from so many entering the field as amateurs, claiming the Web Designer moniker, and as web software programs began to democratize web production. Here I attempt to provide a relevant and hopefully interesting—if maybe not universally shared—definition of UX Design, as it relates to web design in UX Defined »